Disassembling the Scale for the first time

Posted on February 3, 2013 by nivagswerdna

I used reserve and collect from Argos in Whitechapel road, which was the nearest outlet  near work and was amazed that the three people in front of me in the queue were all

collecting weighing scales, just the New Year’s resolutions I guess but still pretty amazing all the same.  Anyway on getting the scale home I decided to have a go.  The first observations are that it’s a pretty slick device, ultra thin and nothing but a glass plate visible from the top.

The scale has an ‘instant on’ feature whereby you just get on the scale and after a weighing period the scale displays the result; this is in contrast to our old scale where it was activated by one of two switches built into the feet of the scale which were used to wake the scale up after which it would calibrate itself. (Incidentally it was this mechanism that I fixed previously since the plastic tabs holding the switches had broken due to use and had to be glued back to keep the old scale working).

Overall the scale seems to work well; it gives a reading which is around 3kg heavier than the old scales but I have no idea which reading is more accurate without measuring a known weight standard so I’m going to assume that the new scales are accurate. 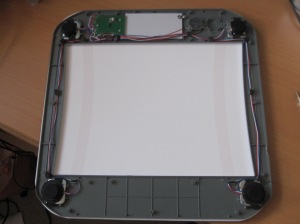 Excellent!  Just what I was after, four load cells are located in the corners of the scale; buying four of the parts separately would have cost me more than £12 so this project is looking hopeful from the get go!  The sensors are all wired to a small PCB in the top left hand corner, power provided by the single cell battery mounted in a simple battery mount and then a custom LCD display located in the center.  The LCD is visible through the glass plate above.